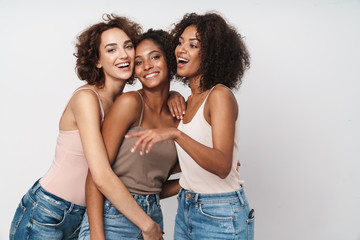 I was reading the NAAFA blog’s latest update on the casting for a new TV show, and this stopped me dead in my tracks:

More To Love is by the same guys that do “The Bachelor” for ABC and is essentially the same show, except all the gals on the show are real girls with real curves.”

It pissed me off. And because this is my blog, I’m about to tell you why.

Second, because it’s a sneaky little divide-and-conquer strategy, of the type commonly used to pit women against other women.

Third, because we’re ALL real women, you fuckwad.

There seems to be a common assumption that, if you’re fat and not particularly ashamed of that fact, you must, by default, HATE thin women, or find them ugly, or some other form of stupidness that can only be described as SOUR FUCKING GRAPES.

I’m fat, and not particularly ashamed of the fact, and I also think thin women are just fine. I largely share the same aesthetic standards of my culture (with a few exceptions — most notably, the ones that allow me not to hate myself), and I often think thin women are just lovely. I also don’t feel particularly jealous, because why would I waste my time? They’re them, and I’m me.

I certainly sometimes sigh to myself wistfully about what it would be like to, say, have curly hair, or be blonde, or to be slender and model-perfect, but I don’t spend a lot of time on it. I recognize these moments for what they are: pure fantasy, a grass-is-greener kind of escape from reality. And then I go back to being me without a whole lot of fuss. I see certain pictures of myself, or put on a certain outfit, or flip my hair in a certain way that makes me think, “Yeah, other people are lovely. But I’m pretty alright myself.”

So then, why is it so impossible to believe that we can genuinely admire others, without simultaneously wanting to look exactly like them? We’re not all crazed bitches from some psycho-stalker horror movie here.

I’m going to steal your haircut, and then YOUR MAN. Fear meeeeeee.

ENOUGH already with all this real woman garbage. We’re all real women, for fuck’s sake — the thin ones, the pale ones, the dark ones, the hairy ones, the not-hairy ones, the short ones, the tall ones, the young ones, the older ones, the fertile ones, the sterile ones, and yes, of course, the fat ones. If anyone has the temerity to identify as a woman in this culture, I’m handing them over an Official Membership Card and inviting them to the pool party, since, you know, I’m a real woman and all. By the power vested in me, etc. etc. And because if you’re willing to put up with the bullshit women put up with every single day, then shit — you’ve earned it.

In closing, I’d like to say: you’re not fooling anyone, fancy-TV-producers-attempting-to-ingratiate-yourselves-with-the-fat-people-you’ve-used-as-the-butt-of-all-your-super-sophisticated-sitcom-jokes-for-so-long. You’re just pissing me off.