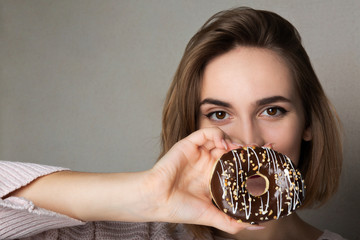 One of my most scandalous messages is that you should  eat whatever you want,in whatever amount you want.

“But you’d overeat all the time!”

“I’d eat such an unbalanced diet I’d make myself sick.”

And I can only figure that when I say, “Eat food. Stuff you like. As much as you want,” what people actually hear is:“Eat food that makes you feel like crap, in crappy amounts.”

This interpretation says some pretty breathtaking things about our culture’s assumptions about food.

For one thing, it says that we believe tasty food and healthy food are not the same thing. And that, if you were to eat exclusively tasty food from here on out, you’d be eating a nutritionally reprehensible diet for the rest of your life.

To which my internal peanut gallery goes, “Buuuuh?”

Not only does every food, including junk food, contain useful nutrition, but more importantly — nutritious food is often fucking delicious. If this is not your experience of food, then one of a couple of things might be going on:

Maybe you need to reassess what “nutritious” means to you by learning a bit of Nutrition 101 — What’s a carb? What’s fat? What is protein? Where do you find them? (A: anywhere there is something edible.) And what do they do for you? (A: pretty much everything.)

Or perhaps you haven’t ever encountered “healthy” food in anything other than a guilt-ridden context — and thus have always felt resentful toward it and, as a result, your primary nutrition concern is to either be on the wagon, or off it and eating as rebelliously as possible.

Maybe you’ve truly never learned to enjoy more than a very few foods, and your palate needs expanding. Maybe you’re under some kind of therapeutic restriction that you haven’t yet been reconciled with.

Or maybe you only allow yourself to eat when you are desperately hungry — in which situation you are more likely to reach for calorically-dense “bad” foods because you’re at the bottom of the pyramid.And, at that stage, getting enough food = getting enough calories.

Any way you spin it, something is interfering with you and your food.

For a second thing, those assumptions indicate that we believe everyone wants to overeat, all the time. I don’t know if this is an assumption borne of  a lifetime of restrained eating and constant hunger,or a misunderstanding of how much food it is actually appropriate to eat (A: however much supports your health and leaves you feeling satisfied, regardless of weight), or a belief that food is addictive, or whether it has  a moral underpinning, but either way — it’s an inaccurate and pretty shitty thing to believe about humanity (and food) in general.

If you are like most human beings, you probably seek pleasure and avoid pain, within certain moral constraints — you like to feel good and you dislike feeling bad.

Those of you with lactose intolerance, especially, will understand when I say:How food makes you feel is often as important as how it tastes.

If you’ve never, ever stopped to think about how food makes you feel after eating it, maybe you’ve been so caught up in the shame-spiral of restraint and disinhibition that you haven’t had much mental real estate to devote to the idea. Or maybe you’ve been eating according to externally-imposed nutrition rules and guidelines without really pausing to notice how you actually feel when you eat that way. Or you’re in the midst of the great divorce. And you’re not alone.

But learning how food makes you feel, both immediately and a little way down the road, is a fundamental part of learning how to care for yourself.

In my mind, food that makes you feel weird or off — no matter how good it tastes right now — isn’t food you can unconditionally love. Amounts of food that make you feel bad aren’t amounts of food you actually want to eat. And if you find yourself continually sacrificing your well-being for the lovely, immediate feel and taste of food, it’s a sign that something has gone wrong.

I eat, without reservation, basically whatever I want. Having a really relaxed attitude toward food, and unconditional permission to eat it, has allowed me to stop thinking so much about what I should or shouldn’t eat, and instead to notice how food tastes, as well as how it makes me feel. Here’s a brief sample of the observations I have accumulated, as a result:

I like the taste of Coca-Cola a lot. But it also makes me feel thirsty and a little weird sometimes, so I drink it occasionally, along with food, and often along with plain water and lots of ice. I feel better if I eat a high-fibre breakfast that contains a good dollop of fat (in the form of butter or cream) — it’s more satisfying, tastes better, and stays with me longer. I feel better, more energetic, less run-down, and more satisfied if I eat vegetables with dinner. I need a good serving of protein with lunch and dinner. If I don’t eat an afternoon snack, I feel sleepy. I feel and function better when I drink at least two big glasses of water each day. I really like strawberries, and I prefer eating them whole, fresh or frozen. Aside from strawberries, I don’t much like eating fruit all by itself because simple sugars alone make me feel funny. Adding cheese or nuts makes it work better. Sugar-sweetened cereals taste really good, but don’t satisfy me and often scratch up my mouth. So I think of them mostly as snacks or desserts, instead of as breakfast. I love chocolate and it leaves me feeling fine, so I eat it when I want it, but I rarely eat enough to make me feel ill or uncomfortable. Light popcorn pops up better and is crunchier than extra-butter flavour popcorn. If I want more butter, I’ll melt some real butter and add it after popping. And I really, really dislike the feeling of being either desperately hungry or uncomfortably full.

These observations allow me to eat what I want, in amounts that I want — which means that I get to eat food that both tastes good and feels good. I get to satisfy my hunger without disrespecting my satiety, and I take care of myself with food instead of hurting myself with it.

To me, “wanting” something means more than just liking how it tastes — it also means considering how it makes me feel. The two variables comes together in a sort of split-second cost-benefit analysis, each time I eat, to answer the eternal question, what do I want?

No matter what I end up choosing in any given situation, the answer is always the same: I want to feel good.

As always, remember that mental health is a part of health.And, if you’re not an asshole, why not leave a comment?